This year Seymours celebrate our 30th anniversary, the story behind our ‘S’ is one we’re delighted to be able to share…

The Seymours ‘S’ is synonymous with service and stories. At Seymours we are privileged to play a positive role in the lives of our clients on a daily basis.

Our own story began in 1992 when a group of talented friends decided to take a leap and go into business. Starting with our first branch in Ripley, an area well known to founders Jim Gore and Rick Cottrell, and shortly after in the Autumn of the same year, the second branch opened in Guildford by Colin Stovold. Seymours was always going to be destined to grow.

In the late 80s and early 90s when the property market crashed, Rick had been made redundant. As luck would have it, this is when Jim contacted him saying ‘I’ve found a great office to rent in Ripley, would you like to go into business with me?’ …and so the concept of Seymours was born.

A pint of inspiration…

The pair’s original idea was to flip the negative reputation that estate agents had at the time and instead promote a forward-thinking, caring team who would work hard to get the best deals for their clients in the most seamless way possible. Between them they knew that selling properties could be an empowering and exciting experience, so why not make it so?

Rick has now passed, however we spoke to his wife at the time, Kate Cottrell, who remembered those early days as clear as a bell. She said: “They both wanted to be known as the best. I think the thing that defined them from their competition, aside from being very good at what they did, was that they genuinely cared about each customer’s life and journey. They wanted to make it the best that they could be.” This was from every angle – purveying the right information in a timely manner, extending opening hours to ensure that people could always pop in when they needed to after work and communicating regularly. Having their fingers on the pulse in the local area gave them the advantage that they knew what was in the pipeline for builds and sales and they kept it local.

When the ideas were flowing, Jim and Rick would be seen in the Talbot Inn, conspiring for growth, inspired by a decent drop of Surrey’s finest ales.

Kate continued: “Rick wanted Seymours to be known as the estate agents that you could go into and have a chat, a real convivial atmosphere. Discuss future dreams so the first ever office was designed especially to feel more like a gentleman’s club, a cosy yet professional space where you could relax and let Seymours take care of you.”

Taking the design brief seriously, Geoff Dixon, a prominent public house designer was hired to create the same look and feel in the first branch. By this point it was the early 90’s, so with no expense spared he opted for Axminster Carpets and three Oak desks with leather tops, carefully placed across the two furthest corners of the room to create a less intimidating and more welcoming atmosphere to anyone walking through the doors. Traditional, solid, dependable – with the design ready to open its doors all that was needed was a name. 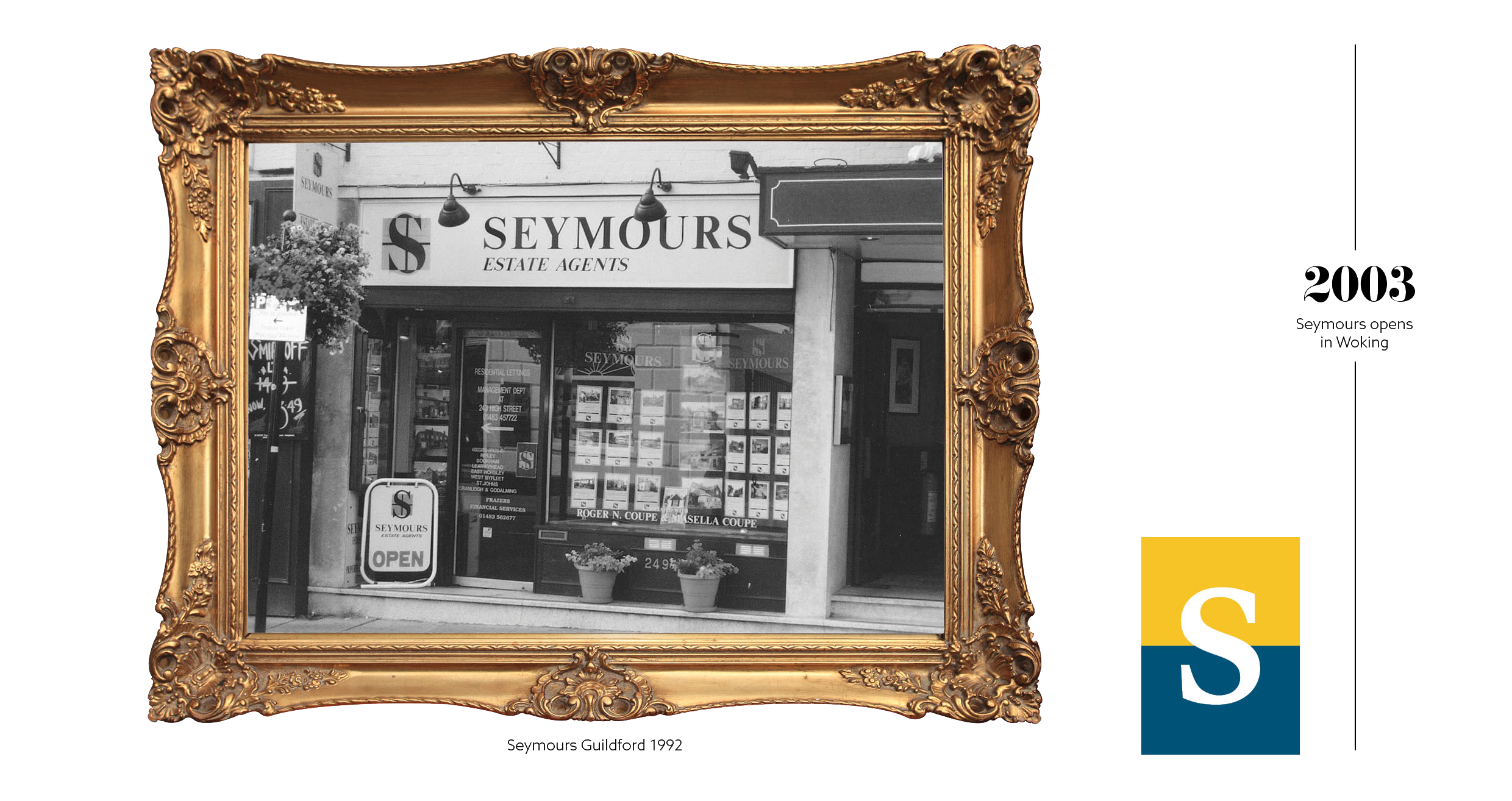 What’s in a name?

Of course, everything. Both Jim and Rick wanted a name that felt inherently British, Churchill’s was already taken, however it had to be of that same ilk. Knowing full well that a lot of phone calls were to be made, the name also had to flow off the tongue easily. Neither were happy with their surnames being used as they felt it was just too long.

Taking different letters of the alphabet, the hopeful team spent hours scouring and deliberating potential names, vetoing many along the way, as if they were naming their own child.
One evening, Jim’s wife Trisha came up with the idea of Seymours, she phoned everyone immediately, Rick was having a bath at the time so Kate took the call and ran up the stairs to share it with Rick. Agreeing immediately that it had a lovely friendly yet professional tone to it, the decision was made and the final piece in the jigsaw was completed. So there it was, inspired by King Henry’s wife Jane Seymour, who was said to be compassionate, determined and considerate, three attributes that Jim and Rick felt reflected the business they wanted to create.

When Trisha had thought of the name, she was most certain from the start that the ’S’ should be prominent on the branding. At first, like any business, a discussion was had to debate the merits on whether just the S would be recognisable enough, yet they justified it by working hard to call everyone in the area to quickly share what it meant.

Seymours launched in April 1992, navigating the gardening rules of the team leaving former companies behind along with their crucial address books and the right to advertise for a short while. Marketing was done via direct meetings and word of mouth, creating a solid foundation for the ’S’ seen on boards in the area.

When Jim decided to retire in 2006, Ian Marlow, John Ferrucci and Franco Orlando took over the reins alongside Colin Stovold and Paul Rickard, and the business flourished. Flash forwards to today and our company ’S’ is as strong as it ever was. When Colin Stovold eventually retired, he handed his share of the business to his son Richard Stovold – a well known face in the Guildford community. Seymours is more than standing the test of time and is synonymous with the highest level of an intuitive property service that we can give.

One lone High Street branch has since developed into twenty spanning Surrey and it’s showing no signs of slowing down, especially since diverting into other service areas, which has seen the launch of Seymours Prestige Homes and our dedicated Land & New Homes division which continues to grow year-on-year.

We remain solid in our wish to prove that the selling process doesn’t have to be prescriptive and have found, through research and feedback, that that’s one of the many things that our customers love about Seymours.

Our customers want an uplifting, easy experience and come to us directly for that.
Yet whether it is finding a new rental, investing in a family home, celebrating getting on the property ladder, sourcing commercial properties or land for new homes, whichever way you enter into the marketplace, ‘property’ is a significant milestone in anyone’s life and our Seymours experience is pivotal to it being good.

With twenty branches also comes twenty opportunities to share our story and service. Certain town branches, such as Woking, have tipped the scales on Seymours becoming the key service provider and our more country based locales are stalwarts of their community. All different, yet all equal in their importance to Seymours as a whole.

Service against all adversity…

Yet, from opening in new locations to sourcing and nurturing new team members, being in business is never a smooth ride. Being on the High Street of every town, means that we ride through the highs and lows of life along with the local community.

Trish Gore said:
“When the first office opened, the UK was experiencing a recession, so overcoming adversity has been with us since the start. My goodness I remember us counting the pennies and realising that without a sale we only had one week’s worth of cash left. It was hair-raising and desperate to think of Seymours closing after all the heart we’d placed into it.”

Sheer grit, hard work and determination have always been at the heart of Seymours business, which has help us survive the hard times and still be here to help the local communities we work with.

Another tough time in the company’s history was the loss of Paul Rickard. Paul had joined the Guildford team as an employee working for Colin Stovold when the branch opened in 1992. Paul worked his way up to the position of Partner in the branch, where he stayed until his untimely death in June 2016. Paul’s funeral was held at a venue where he was once a choir boy, Guildford Cathedral. Paul was so highly regarded in the Guildford community that there was standing room only and some couldn’t even fit into the building.

“As tricky and as stressful as hard times are, they really do force you to look inwardly at the business and how it’s working. The global financial crisis of 2007/2008, when the market just died, made us all take a deep breath. Within a week, many of our clients got cold feet about selling their home and withdrew from the market, which was something that had never happened before” commented Director, Ian Marlow, “We had to hang on and hope that sales would start again.”
“I’m so glad of our team’s caring nature during that time” said co-Director John Ferrucci. “The need for shorter term solutions led us to widen our services and introduce a property rental service. It was something that we’d been considering for a long time and the crisis showed us that our customers needed it and so out of adversity, has grown the hugely successful lettings business we operate today.” Seymours continues to pull together as a team and work hard to turn negative situations into positive, future focused ones that lead to growth. 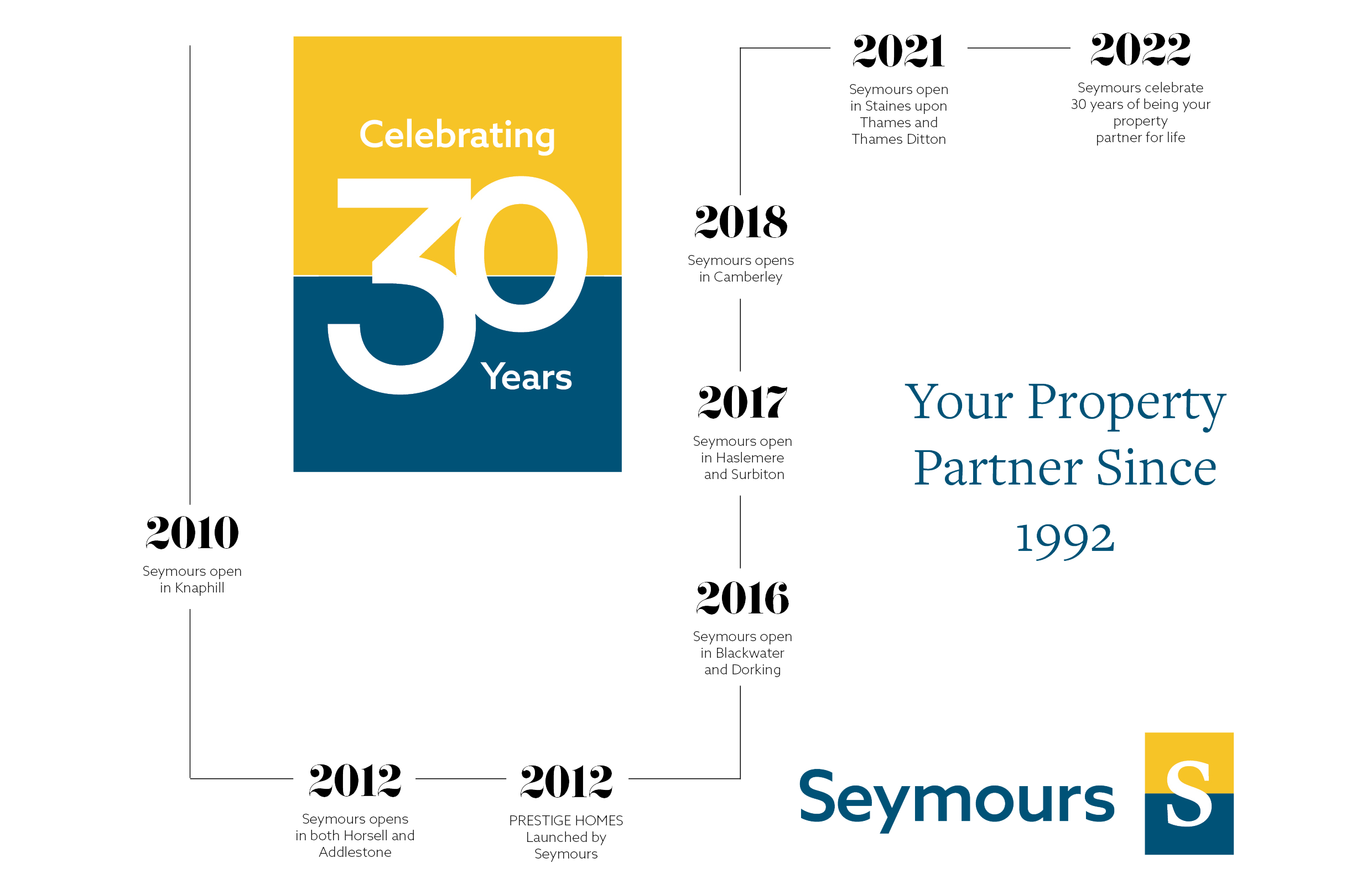 As a business scales, so does its team. We know that we must be doing something right because so many of our staff stay for so long. We dedicate time to ensure each member of our team is appreciated, invested in and performing to the best of their abilities, some of which we support to go on and open their own branch in a new territory.

Each new branch that opens is owned and run by the Partner in that individual office, someone we already know and trust as a manager, this has been crucial to carrying our brand values into more towns and villages.

Today, Seymours is a co-operative of talented and driven individuals. The partners in each office are all business owners in their own right, somehow all so different but all sharing the same company ethos. It’s a special kind of magic that bonds us and makes us so successful.
Through surprising, uplifting, good, bad, challenging and everything in between, we’ve somehow managed to stand steadfast in our mission to be the go-to, people-led property consultants that we are today. We always want to be better for our customers and we think Jim and Rick would be proud of us reaching this milestone with their original company values in mind.

We are so proud of each and every one of our existing Seymours family, the bond between the branches is strong. We are excited to see what the future holds. Here’s to the next thirty years, may we all have long and surprisingly good stories to tell as we remain our client’s property partners’ for life.